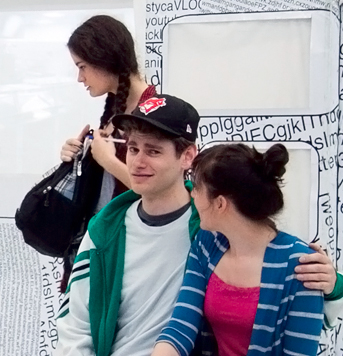 I would like to take this opportunity to introduce myself – I am Dweepesh, co-op MBA candidate at the DeGroote School of Business in McMaster University. I have recently joined MCT as a Marketing Communications Specialist for the summer 2013 co-op term.

While watching my first theatre show presented by Mixed Company Theatre, I realized why I wanted to work here. I have enjoyed theatre over the years, but none like the one I experienced on Wednesday. The first act of SHOWDOWN 2.0 was about the worst case scenario of bullying in high school, especially through the use of social media. While watching I could sense the nervousness inside me because of the issues that were raised. I felt the actors portrayed the scenarios very realistically.

The second act was something I could have never imagined. The ‘joker’, or the facilitator, asked the audience to be involved in scenes they felt they’d like to change, and to pick a character in the scene they would want to replace. I was surprised by the enthusiastic response of the middle school kids, who volunteered to get up and intervene in the play. I noticed how many wanted to become the oppressor and change the way the bully treated others. Going up in front of their peers was a very brave step. The audience participants really influenced me, and if I was called up on the stage, I would have probably liked to replace a bystander and try my own ways of standing up against the bully.

Thank you MCT for this wonderful opportunity and I look forward to a successful term!