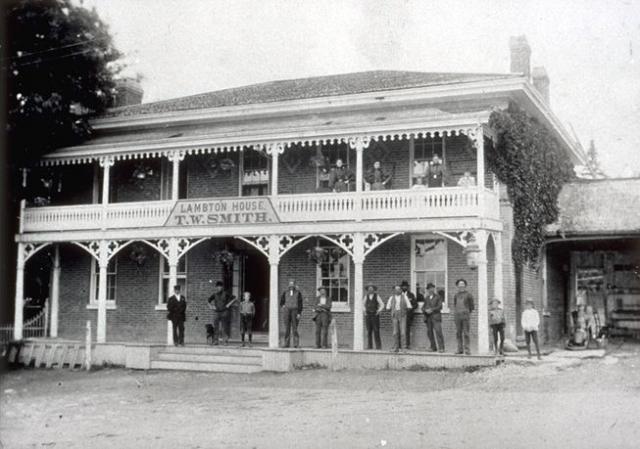 Lambton House is a registered charitable organization created twenty-five years ago interested in the local history, and saving the Lambton House site, which is the last remaining original historical building in the area. Historically the site was closely tied to the economies of the Humber River, the mill trade along the river, and is deeply rooted in the Aboriginal and European histories. The City of York gave Heritage York permission to acquire the Lambton House property for the purpose of running

Lambton House is a registered charitable organization created twenty-five years ago interested in the local history, and saving the Lambton House site, which is the last remaining original historical building in the area. Historically the site was closely tied to the economies of the Humber River, the mill trade along the river, and is deeply rooted in the Aboriginal and European histories. The City of York gave Heritage York permission to acquire the Lambton House property for the purpose of running programming.

In the 2011 City of Toronto Neighbourhood Profiles, Social Profile #1 for Lambton Baby Point, we can see the breakdown of people’s ages in the community. 56.8% being ages 25-64; 20.7% being children ages 0-14; 11.4% being seniors ages 65+; and 11.2% being youth ages 15-24. From this data we can see that the two groups in Lambton Baby Point with the same percentage of representation are youth and seniors. These two groups are the very participants that we hope to connect, work with, and foster more meaningful relationships with across the generational gap. Mixed Company Theatre and Lambton House are in their second year of a three-year Inter-Generational Project that will engage youth and older adults in workshops to share life stories; bridging the generational gap through the learning and understanding of each other’s perspectives. These workshops will culminate in the development and performance of community plays showcasing the stories of our inter-generational community members and participants.

A few years ago Mixed Company Theatre (MCT) toured their show Old Age Ain’t for Sissies and had a performance at the Lambton House. The show was sold out and the community gave it rave reviews. It used a unique style of theatre that engaged the audience regarding the issues raised in the show. More people became aware of the Lambton House, both as an organization and as a site thanks to the MCT show. Previously few people within the community or in nearby communities were aware of the rich history and location of Heritage York – Lambton House.

After Old Age Ain’t for Sissies, the Lambton House organization reached out to MCT to discuss further avenues of working together. This led to the development of the Inter-Generational Project. Lambton House has been trying to better connect to the diverse communities in their geographic area, especially those living in the social housing that surrounds the organization. Members of Lambton House are interested in representing the ethnic diversity and interests of residents in their community.

Over the years there has been difficulty getting residents of the community engaged with the programming at Lambton House. The organization has also found it challenging to interest younger audiences in the history of the site. The organization is keen on adapting their programming to cater to the contemporary issues that impact the residents they are trying to reach. This is why the three year partnerships with MCT to increase inter-generational bonds is so important.

In 2015, one year into the Inter-Gen Project, MCT and Lambton House had their first workshop and began developing a show exploring ways for seniors to connect with youth. In the second workshop that year, UrbanArts (another Inter-Gen Project partner) connected with Lambton to work on House, a show that their community was developing. Interestingly enough UrbanArts was focusing on how youth could better connect with seniors. UrbanArts was using public transit as the lens through which they explored the need for youth to be more respectful and empathetic of seniors. This has been the most common place of interactions between the generations on a daily basis. Inter-Gen participants from Lambton House were invited by UrbanArts to collaborate in workshops with Mount Dennis participants.

Members of Lambton House are very vocal about the fact that they do not see their organization as a seniors’ organization, but as an organization deeply interested in preserving the Aboriginal histories, issues, and culture of the heritage site.

Joy believes MCT has really made a difference in helping Lambton House develop their programming. They have helped them better interpret the heritage site history, while connecting to the contemporary audiences and interests of their neighbouring communities. The social goals and values of MCT really resonate with her. She has known the MCT playwright, director, actor, and facilitator, Rex Deverell for over forty years, and trusts that if he has worked with MCT for such a long time then it was worth having Lambton House as a partner for the Inter-Gen Project.

Over the five years that she has worked with and been a member of Lambton House, she has seen the organization slowly make more conscious efforts to accommodate the interests of their community and become more open to younger residents. She started gardening on the Lambton House property and invited neighbours to connect with the organization through sharing in gardening activities. Some students even approached them to fulfill their mandatory community service hours for school where they helped with gardening among other volunteer work with the organization.

She does not know what 2016 holds for the Inter-Gen Project but would encourage a stronger focus on the vast knowledge and teachings learned from the Aboriginal forefathers of the land upon which Lambton House is built. She is interested in exploring and honoring all the ways that Aboriginal peoples have helped Anglo-Europeans to settle on the land, including all the contributions to health, farming, hunting, and survival skills that they contributed.