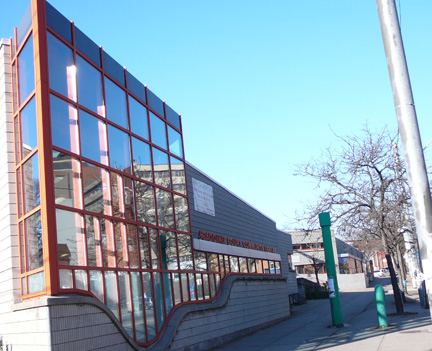 Scadding Court Community Centre (SC) has partnered and worked with Mixed Company Theatre (MCT) a number of times over the past 25 years. Herman Ellis, who is now a program manager at SC, started his relationship with SC as a young individual using the services at the community centre almost 30 years ago. Since then has worked his way up through the ranks. He first met Simon, the Artistic Director at MCT, when the company put on the SCAT Cabaret with SC. Herman later reconnected with Simon through a SC and Ryerson collaboration for an LGBTQ older adult program, which included a forum theatre piece that MCT facilitated. Later MCT would collaborate again with Ryerson to put on an older adult Aboriginal show in 2015 titled, ‘Out of the Illusion’. The summer of 2015 SC and MCT also developed a youth workshop and put together a performance for World Drama Day.

The Inter-Gen Project: Year One

Herman appreciates that through the Inter-Gen Project MCT is adding a variety of arts projects and programming to seniors and youth, something that SC didn’t previously have. In the first year of this project, MCT ran a number of workshops with older adult and youth SC community members. Together they were also able to develop a show. The older adult participants liked the experience of exploring what they enjoyed ex. ballroom dancing and playing instruments, which reminded them of their childhood. MCT’s process of working with community participants allowed them to incorporate all of their talent into the show.

Herman observed that the workshops had multiple levels of impact: (i) There was a lot of community and trust building in the rehearsal phase allowing participants to highlight their skills and interests; (ii) Participants learned what it took to put on a show and overcome obstacles; (iii) Participants were able to see how their work affect the audience, and they were able to share their stories. Herman believes that MCT’s partnership with SC is a unique one that came with the large challenge of a language barrier where 80% of older adult participants did not speak English. Through including interpreters and finding ways to communicate without speaking, MCT was able to overcome this barrier – an ability that Herman highly respects and admires.

No matter what challenges MCT faced they were able to adapt, anticipate changes, work through cultural assumptions, and assumptions about older adults. The Chinese older adult participants were very hesitant to talk about their experiences as immigrants, their histories, or personal stories. Despite this MCT was able to go with the flow and encouraged these participants to engage in whatever manner they were comfortable.

Some of Herman’s intentions for working with Mixed Company Theatre included: Providing an access point to the performing arts at SC; having a strong partnership with a professional organization that works well with and respects community participants and partners; being able to continue working with a trusted organization; working with an organization that communicates well. Scadding Court Community Centre is a very busy and dynamic centre that has many projects going on at once. Herman greatly appreciates that MCT is a strong, flexible, interdependent, and well-structured organization.

Has the Inter-Gen Project brought youth and older adults together in 2015?

MCT has facilitated separate workshops for youth and older adults building trust with each, but has yet to bring them together in 2016. Herman hopes that 2016 will see greater inter-generational work. He thinks that, in general, we underestimate youth and their interests in participating. AT SC youth readily participate in programming, but mainly sports after school programs and field trips. According to Herman getting youth to participate in the arts and life skills building after school programming has been more and more difficult in recent years. This has been an ongoing trend he has observed in the non-profit youth-serving sector. Community organizations are competing with so much more alternate programming, and the plethora of things to do on the internet that is taking up more and more of the time of students after school. Herman sees that some solutions to this drop in youth engagement are: offering tokens, honorariums, and food at each session.

One of the challenges for the Inter-Gen Project is finding or creating incentives to retain youth and older adult participants for a year, far less for all three years of the project. Herman sees a solution to retaining youth would be to reach out to the youth who already have an interest in the performing arts, e.g. theatre and dance students, as well as youth interested in the arts as a whole.

Herman sees himself as living proof of the benefits of doing theatre from a young age. As a young black youth that lived in the Projects being part of school and community theatre kept him busy and afforded him the opportunity to engage with a wider diversity of cultures and world views. He was far too busy rehearsing, developing relationships with the theatre community, and having fun, to be tempted by the drugs and alcohol that other young kids in his neighbourhood were experimenting with.