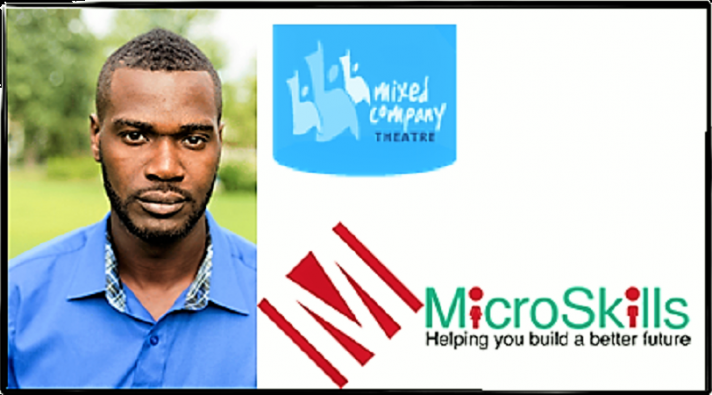 Community MicroSkills Development Centre is a multi-cultural, non-profit, community-based organization committed to assisting the unemployed, with priority to women, racial minorities, youth, and immigrants. Recognizing barriers that immigrants, racial minorities, youth, and women face in their efforts towards self-sufficiency, MicroSkills aims to enable these groups to participate more fully in Canadian society, and assist them in acquiring the skills needed to achieve self-determination and economic, social, and political equality.

The programs are designed to assist the unemployed achieve career and personal goals. Clients can choose as many services as required to help them on their way to becoming self-reliant and economically self-sufficient.

Sefton Jackson is a graduate from the Humber College theatre program, and was washing windows for corporate buildings when he met Waawaate Fobister. Waawaate was one of the actors at Mixed Company Theatre (MCT) in Cobblestone, a show that reflected the stories of youth living on the streets and in shelters. Waawaate saw in Sefton a kindred spirit for the performing arts whose talents were better served on the stage, not washing windows. He encouraged Sefton to check out MCT and recommended him to the artistic director, Simon Malbogat.

Sefton later interviewed with Simon, who saw his raw talent and passion for acting, and thought that he would be a perfect addition to the Cobblestone show. Sefton started acting in Cobblestone in 2006, then moved on to Showdown and Showdown 2.0. He continued touring with Showdown 2.0 through high schools and public schools for a number of years. During this time Sefton began exploring roles outside of acting, and began facilitating workshops with Mixed Company Theatre. The most recent workshop he has facilitated has been in partnership with the Community MicroSkills Development Centre, delivering workshops looking at gender differences at North Albion Collegiate.

The workshops were designed to be homework drop-in sessions, where students spent time getting help with their homework, and participated in the MCT and MicroSkills workshops. Initially, the workshops were catered to male students, but later were opened to include female students. The students were comprised of Grade 9-12 youth who faced difficulties keeping up in the classroom. Sefton used games as a way of entering into deeper conversations about the power dynamics between genders, equality, and how to build more respectful peer communities.

These workshops were developed to encourage learning in both directions, from the facilitator to the students, and vice versa. Some of the things that Sefton learned were a couple of new phrases that he had never heard before. These included “Curing AIDS”: the idea that anything could be cured by having sex, and “Girl Clowning” or simply “GC”: to go online and act nicely or flirt with someone, then behave in the exact opposite way in person in front of their peers, essentially shaming them (usually a boy behaving this way to a girl).

Sefton used the opportunity of the youth sharing and explaining these phrases to engage in a discussion about the impact of the behaviour, and the power dynamics of the actions that these phrases elicit. He worked with the students to identify who the power wielders were in instances of Girl Clowning, the power dynamics between men and women, and the unfair and negative implications. Through this informative dialogue, Sefton was able to help the students understand how these phrases and actions deteriorate relationships between the genders, and demean female students.

Each workshop started by going around the circle and sharing everyone’s names, since there were different students each week. In addition to sharing names, students were asked to check-in with how they were feeling that day, and in that moment. This ensured that Sefton, as well as the other students, were aware if someone was having a bad day and needed extra support or empathy. Sefton encouraged an environment where there were no right or wrong answers, so that students could speak frankly without judgement. Students were allowed to share their views freely, using language that they were comfortable using. The workshops began with Sefton identifying that he was not an expert, but a facilitator, open to learning with the students. If someone required services beyond Sefton’s abilities he would then refer them to other resources.

Students came to the workshop identifying each other by their gender, with a distinct separation between boys and girls, and all the stereotypes that went with it. At the end of the workshop, students left seeing each other as human beings and equals. In the beginning, students entered and sat by themselves, not knowing anyone, and not wanting to sit next to anyone. By the end they developed friendships, sat together, shared jokes, and played games. Sefton also used games to show the students the shift that had happened in their social interactions with one another, and at the end they were able to understand the benefits of nurturing a communal and friendly culture of equality and respect.

Sefton was able to engage with the students in a way that allowed learning to happen. One teacher, after observing Sefton’s first workshop, was worried that the rest of the workshops would just be repeating the same games and format, and that students wouldn’t be learning anything new. He asked Sefton to include ways of addressing and building perseverance, and helping youth deal with their inner relationship with themselves (How do I deal with me?). Sefton was able to adapt the workshops to include inspirational quotes from famous figures such as Martin Luther King and Einstein. He had students create three images to go with the quotes that most resonated with them. The images were meant to be visual representations of perseverance highlighted in the quotes.

Sefton didn’t expect to become so attached to the students, since he had only spent five sessions with them over two months. He really enjoyed keeping up with and learning their various slangs, and felt that the kids not only accepted him as a peer, but fully respected him as a facilitator. Facilitating workshops with Mixed Company Theatre has helped Sefton realize that he enjoys engaging in the arts as a facilitator working with youth through different themes and issues.

What keeps him connected to Mixed Company Theatre

In his own words, “To be honest it’s Simon.” This is an answer that several participants of MCT programming have mentioned. For Sefton, he has learned many lessons from Simon, lessons about people, life, and the various ways that we manipulate and are manipulated by others in the arts sector and in general. With each and every show and workshop that he has worked on with MCT, there is always a culture of learning: learning from each other from participants, and from the audience. This has helped Sefton, as an actor, to be prepared to adapt and be open to recommendations and feedback. Each performance is different, which allows him to really sharpen his improvisational skills. Sefton tells us that when you’re an actor with MCT, you learn to do many things beyond acting; you learn to put up and tear down your sets and pitch in with the rest of the team to ensure that you all give the best performance possible, and that has prepared him for the wider world of performing arts.