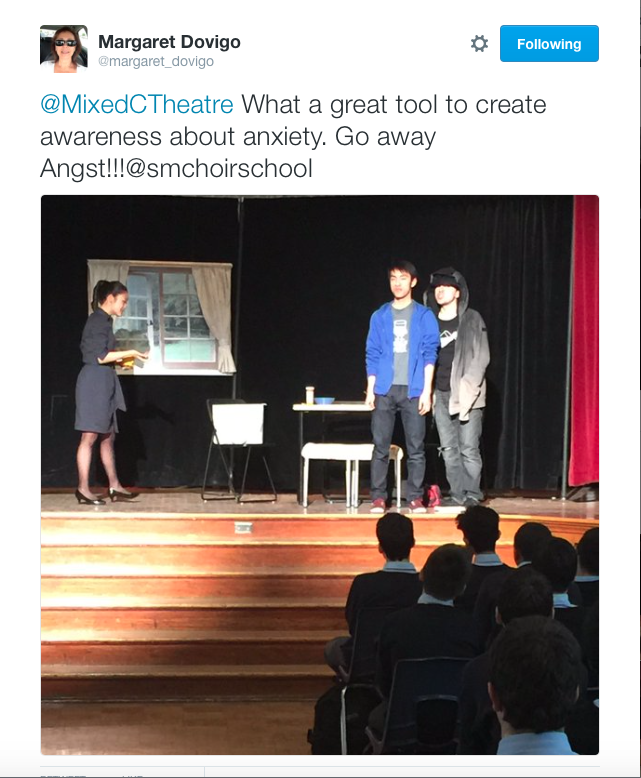 Booking a Mixed Company show or workshop is quick and easy, and we come to your facility, so you don’t have to worry about organizing an off-site trip. Whether you are an education, community organization or corporation we can cater to suites your specific needs. For educators, our teaching guides are available online, in a flexible format for your use. What could be simpler?

Testimonial from a satisfied educator

“As a counsellor who has for years worked both with survivors and perpetrators of sexual assault, as well as with drug and alcohol issues, I thought that the original script was very realistic, yes not simplistic, and that the actors were real with their possible errs in judgment and behaviour.  The storyline and the dialogue created scenarios in which one could easily imagine oneself in the same situations or saying the same things.  The forum format provided students with the opportunity to recreate each scene, allowing them to practice their assertive and communication skills and/or to better appreciate just how difficult these situations can in fact be, inebriated or not.

have seen numerous forum productions over the years and while all of the components of the performance are important, it is the facilitation that has always struck me as the most critical.  With this show, it was the approach of the facilitator, Duncan McCallum, who made all the components of the production come together.  This format only works as well as the audience feels safe and supported to express their views and to play out their perspectives.  With his stellar cast, Duncan finds the perfect balance in creating this safe environment, doing this both in the non-judgemental manner in which he appraoches each person and situation, but also in the wya in which he educates on some points (example regarding responsbility if having sex with someone who is drunk) and the easy way he is also quick to address any inappropriate comments or behaviours from the audience.  Moreover, he seemed so comfortable in his role that I was left feeling that he had no idea just how good he is at what he does, a charming attribute in any leader.

I would highly recommend this performance to any educational institution (example, high schools, colleges and universities) or to any organization whose membership is largerly teenagers or young adults.”